How Much Money Do You Need To Travel Long Term?

This is one of the most commonly asked questions I have received over the years. It’s always quite a hard one to answer as there are so many factors that can affect how much money you need to travel long term.

Nevertheless, it’s really important to have a rough idea of what you need to save to make sure that you don’t either quit your job to travel for 6 months and then end up lasting 2 or spend years saving and never getting to go on the trip because something gets in the way.

The first thing to point out is that this guide is designed for aspiring backpackers who want to travel for time-frames of several months to over a year. A lot of people who ask the question “how much money do you need to travel?” have only experienced package holidays or short trips to expensive resorts. It always shocks them to hear that you can actually travel for over a month for what they’ve spent on 5 nights! How Much Money Do You Need To Travel Long Term?

This is where it is important to be honest with yourself and identify what kind of standards you are willing to accept and what you can’t do without. The amounts listed in this article are based on a budget conscious traveller, this means mostly hostels and cheap eats with local transportation to get around.

A bracket is given to include a lower end for the very stringent and a higher end for people who wish to do more activities and have a little higher standards for accommodation. Keep in mind that this is just a rough guide, there are people who can travel on almost nothing and people who can’t help blowing money like crazy. If you know that you can’t stomach hostels or need to eat in nice restaurants or want to fly a lot instead of bussing it then you might need to lower your expectations of how long you will be able to travel for. Conversely, don’t budget so tightly that you miss out on doing or seeing things that you may never get the chance to do or see again.

READ MORE: 11 Budget Travel Hacks That Will Save You Hundreds!

The region or regions in which you wish to travel obviously have a big impact on your budget, a month in South East Asia will differ significantly in price to a month in Europe. Long flights between regions also add a huge chunk to the budget vs overland travel or remaining in one area.

Countries within regions can also differ significantly, the price ranges here are averaged over the countries within a particular region but if you spend much longer periods of time in the more expensive countries then your budget will be thrown off. Rye, UK – One of the most beautiful English villages

Below you will find the answer to the question of how much money you need to travel. I have selected several of the most popular regions for new travellers and given a range of expected budget needed per month. I have also included a brief description of what amenities that budget is likely to get you.

A lot of budget guides are based on what you will spend whilst already in each country; this is helpful but tends not to include things like inter-country transport, insurance and inevitable unforeseen expenses. I have tried to account for these extra costs so as not to paint an unreasonably optimistic picture. South-East Asia is one of those place where you can travel really cheaply if you want to. The lower end of the budget will get you mostly a hut without air-con or a bunk in a basic hostel. You will need to eat at local restaurants and bus around the place on mostly local busses. Expensive activities are still possible but will have to be managed and not gone overboard on.

The higher end is more reasonable if you want to do a lot of expensive activities like scuba diving, treks, boat trips, etc. You can also stay in private rooms with air-con part of the time or nicer dorms with less beds. You still won’t be flying around or eating at expensive restaurants but it gives you more room to be picky on quality. 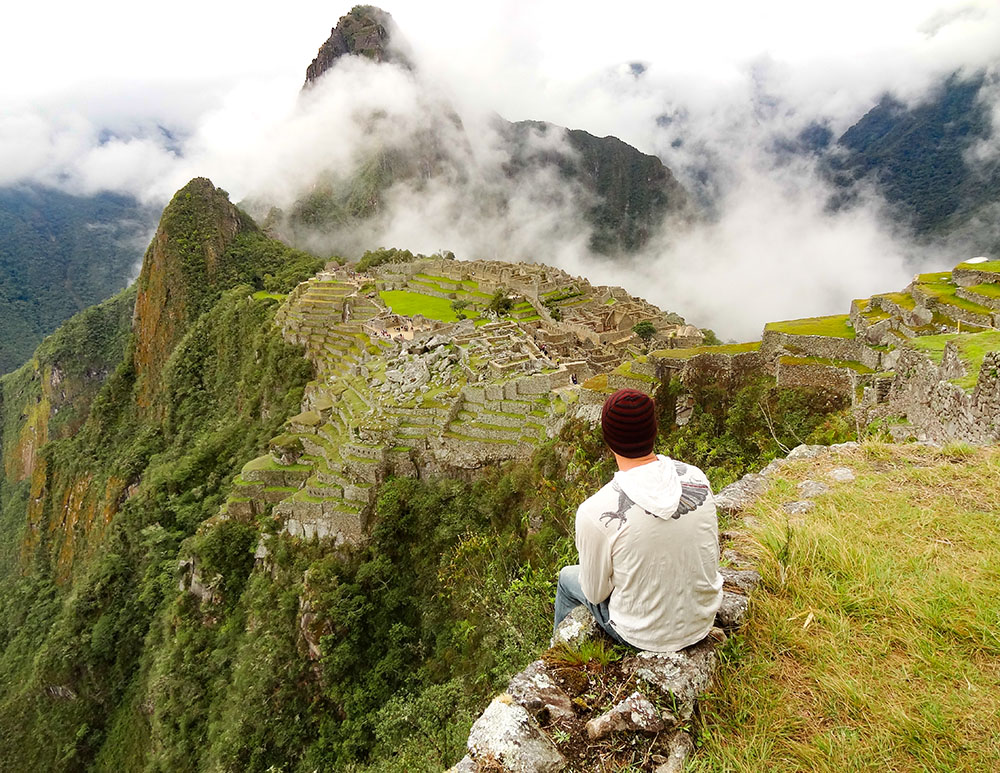 South America is a region in which the price varies pretty significantly between countries. It is also a huge area which is both expensive to get to and to get around within. This budget is averaged between the countries but you will need to be aware that Argentina and Brazil are significantly more expensive and so the budget is based on less time being spent there in proportion to the cheaper countries.

I travelled on about the middle of this budget, which included a flight from Thailand and pretty much incessant partying. You’ll be able to get a comfortable hostel or a cheap shared room and eat at mostly local restaurants with the occasional hostel meal. You will need to be very careful with the expensive drinks sold at the hostels and mostly procure your own; You will need to avoid flying and take busses but you should have enough for one internal flight if needed. I did a few expensive activities but they were mostly kept to a minimum, I walked to Machu Picchu and didn’t do Patagonia for instance.

The upper end of this budget will get you a couple more internal flights if you really don’t think you can manage 24 hours plus on a bus. You can also do more short tours / activities such as the Inca trail, jungle tours, etc. You also probably won’t need to be sneaking booze into the hostel and having dorm parties as much! Which isn’t to say you can’t if you still want to…

Speaking of hostels you can afford to take a break from the often raucous party atmosphere of South American hostels and experience some of the beautiful guesthouses on offer. The breathtaking Neuschwanstein Castle in Germany

Western Europe is not a cheap place to travel however it is possible to backpack with a fairly reasonable budget. The thing is with travel in this region is the lower the budget the more time and sacrifice is needed.

To travel on the lower end of the budget you will need to get a lot of your food from supermarkets which will involve preparing meals. You will also need to do most of your drinking at the hostel and just have a few when you’re out. Private rooms are definitely out of the question unless you can share with several friends.

You can see quite a bit without paying entry fees, but if you want to delve deeper into a place and see some of the attractions then entry fees can really add up. Getting between countries however can be done quite cheaply if you’re willing to spend a bit of time on a bus. The picturesque village of Roussillon in France

The higher end of the budget means you can enjoy some of the amazing restaurants on offer occasionally. You can also feel a little more comfortable buying drinks in bars and clubs and spending on entertainment/events (there are some amazing festivals in Europe!). You will also be able to take some train trips between countries which are more comfortable and faster than the bus but significantly more expensive.

Europe has so much to see and do as well as amazing cuisine and entertainment options, it really is a shame to miss out on truly experiencing the countries visited. If you have a limited budget I’d recommend shortening the trip rather than trying to spread the budget thin however there’s something to be said for bumming it through as many countries as possible as you can have some amazing adventures along the way!

Another great tip is to travel Europe during off season or bumper season. When you book your holiday outside of the busy summer months of June-August, most properties lower their prices to try and attract tourists when business is quiet. The other bonus of this is of course, there are far less crowds during off season in Europe! I’m using the kind of outdated term ‘Eastern Europe’ to encompass the Balkans, Baltics and everything in between. There are some amazing countries and bargains to be had travelling through these regions and I really recommend spreading your trip between east and west to help stretch out those euros.

The lower end of the budget is easily doable in these countries without having to sacrifice much. Restaurants, accommodation and activities are mostly all cheap and of good quality.

Hostels aren’t as widespread however outside of major cities so travelling with someone else will help to keep costs down. Some places are quite a bit more expensive, popular cities like Prague and Budapest will set you back a lot more than Albania or Bulgaria for instance.

READ MORE: Discover The Cheapest Ways to Travel With These 6 Useful Tips!

The higher end of the budget here can mean some really nice accommodation options and a lot more activities. If you want to spend more time in the popular tourist destinations like the aforementioned cities or the Croatian coast then you might be tipping toward this end of the scale.

There is also a lot of ground to cover in this region so trains are the much nicer option. Frequent bus rides can get a little old, especially over longer distances. I hope this has been helpful and provided some rough targets to aim at. If you need some tips on how to reach your target then have a look at how developing a minimalist mindset can help boost your travel savings.

I’ve found that the best policy is to pick a rough target then just let whatever happens happen. Don’t spend your days fretting about money, be conscious of your budget but not obsessive. Focus on having the best time possible, there’s no point getting an extra month out of your budget if you’re compromising past your point of comfort/enjoyment.

Maybe you’ll find the opposite and revel in the more spartan style of backpacking and end up going for years on barely any money at all. Either way I hope you have an amazing time! Disclaimer: This post may contain affiliate links. At no extra cost to you, we may receive a small commission on purchases made through these links. We only recommend products/services we have tried/love! We’re Ann and Rick, a free-spirited Canadian and Aussie couple currently travelling around Australia in our van.

Lovers of good wine, road trips, minimalism and off the beaten path destinations – you will find these topics covered in depth on our blog!

Travel has changed our lives for the better and we want to show you how it can do the same for you!

Welcome to our journey 🙂

Memories from the Great Ocean Road🌊 .. Some of

Discovering hidden gems in Tasmania💎 .. One of

The making of our van!✨ .. Who knew it would be

Morning walks on the beach, it doesn't get more sc

The Otways🌿💦 .. An unexpected highlight of o

It's chasing sunsets for me!🌄 . . How about you Sarajevo to Mostar – How to Travel By Train, Bus, Car or Tour © 2023 The Road Is Life. Some links on this site are affiliate links. If you click and make a purchase, we may earn a small commission at no extra cost to you. As an Amazon Associate, The Road Is Life earns from qualifying purchases.